You don’t have to know everything there is to know about big sprays to make your own, but it can’t hurt to understand some of the reasons why you might want to make your own batch before the bugs really get to you. So while these are some of the more approachable homemade bug spray recipes, you may want to read up on why it’s a good idea to make your own first.

One of they key ingredients in store-bought bug spray is DEET, which, while not entirely harmful to the skin, isn’t exactly the best thing to spray on your body all day long during the spring and summer months. DEET is what keeps pesky bugs away, but when sprayed on the skin, it can have negative effects. The skin touched by bug spray with DEET in it can get irritated, red, or even well. These store-bought sprays can also leave behind sticky residue and a chemical smell you can’t quite shake. For some, this is is well worth being able to be bug-free in the outdoors. For others, there are more effective solutions, like these homemade bug spray recipes. To be clear, this bug spray consists of lavender oil and not much else. You can dab it on the skin to keep bugs away, or you can dilute it with water and use it as a spray. It’s not advisable to put many essential oils directly on the skin, so it’s best to mix the lavender oil with water first.

This one can be sprayed directly onto the skin every time and, unlike store-bought big sprays, it won’t leave you feeling sticky for hours afterward. For this one, mix together a half cup apple cider vinegar, a half cup of witch hazel, and 40 drops of eucalyptus, lemongrass, tea tree, citronella, or rosemary in an eight ounce spray bottle.

Not surprisingly, this is another bug spray which contains essential oils. Because most oils work well for repelling bugs, it should come as no surprise that you need some for this. Add two tablespoons or vodka or witch hazel, two tablespoons of grapeseed, almond, olive, jojoba, or neem oil, a half teaspoon of vodka if you aren’t already using it, and 100-110 drops of essential oils. If you don’t mind spending a little extra time making a bug spray and the smell of vinegar, then this vinegar bug repellent spray is another solid option. You will need a 32 ounce bottle of apple cider vinegar, two tablespoons each of dried rosemary, thyme, sage, lavender, and mint, and a large jar with a lid. Add everything together in the jar and keep the lid on tight for two to three weeks. After that time is up, drain out the herbs and transfer the liquid to spray bottles to use as needed.

If your nose is a little more sensitive to smells, this citrus bug spray could be more gentle on the nostrils. You just add together two tablespoons of witch hazel, one teaspoon of liquid Aloe Vera, a teaspoon of citronella oil, and a half teaspoon each of lemon and grapefruit oils. You’ll need to shake the bottle before each use, but the citrus oils will leave you smelling more on the fresh side than chemical-infused.

If you aren’t wild about putting apple cider vinegar or vodka on your skin, you probably aren’t alone. That’s why there are other options out there for homemade bug sprays, including this water-based spray which is sure to have its own lasting effects. For this one, add together three or four tablespoons of lemon juice, 15 drops lavender essential oil, three or four tablespoons of vanilla extract, and distilled water. 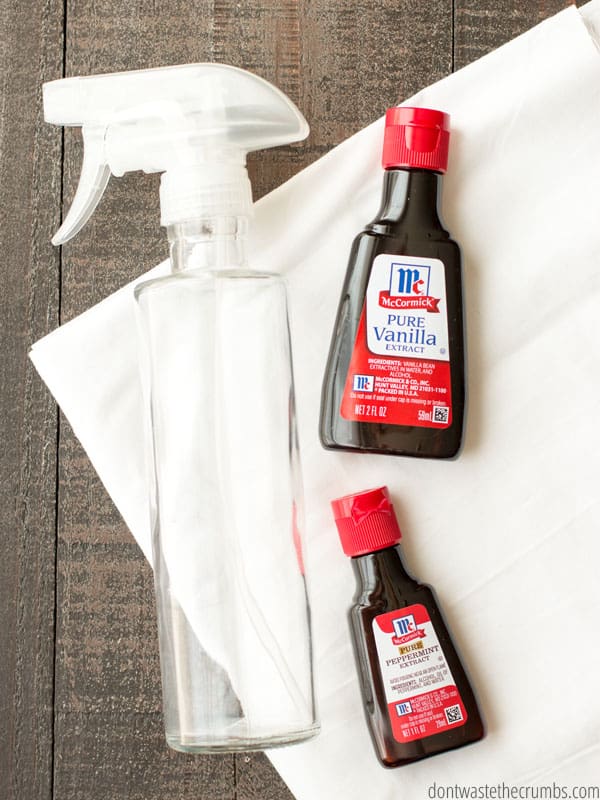 After you combine all of the ingredients for this one, it’s best to let it sit overnight or even longer before using it. But the longer you let it all steep, the more effective it will be. Just add one cup of vodka, one tablespoon of vanilla extract, one tablespoon of cloves, and one tablespoon of peppermint extract into a spray bottle. And remember to shake the bottle before each use.

Maybe essential oils just aren’t your thing. Homemade bug spray or not, it can be hard for some people to go back on their opinions about essential oils and that’s totally OK. If that is the case for you, then try this castile soap-laden option. All you need to do is mix 10 teaspoons of liquid castile soap, one teaspoon of neem oil, and four cups of distilled water.

While some other homemade big sprays already include vodka in some small way, this one has a lot of vodka mixed in to work overtime in keeping bugs away. This one requires you to add together a fourth cup of vodka and distilled water each, one tablespoon of vegetable glycerin, 85 drops of Plant Therapy’s Shield Me Essential Oil, and, as an optional ingredient, one teaspoon of pure vanilla extract.

When you make your own bug spray, you know exactly what is going into it. This can make you feel a little more at ease about spraying it all over your skin throughout the day. And for parents, it can make them feel more comfortable with the idea of it touching sensitive exposed skin on their children. And any way you look at it, the benefits of making your own homemade bug spray are hard to ignore. DIY Foot Soak Recipes That Will Help You Pamper Yourself 6 Ways To Recycle Your Christmas Tree