What Is A Turkish Towel? It’s More Than Just Extra Fluffy Cotton You might have a favorite bath towel in your house that is extra absorbent and soft and just gets the job done. And honestly, that’s totally fine. But until you have learned what a Turkish towel is and its own benefits, you will probably stick to standard terry cloth bath towels. Once you become familiar with Turkish towels, however, your life will basically change. But what is a Turkish towel? It is a towel typically made in Turkey on on Turkish looms and with Turkish cotton.

They can be identified by their fringed ends and because most Turkish towels are so large, they can also often be used as lightweight blankets. The cotton used with these towels is a lot softer than what you would find with other towels and is typically more absorbent too. They might not look that way since they are so different from standard terry cloth bath towels, but Turkish towels are plenty absorbent and soft and even longer lasting. The quality is almost unparalleled and once you try a Turkish towel for bathing or as a comfortable throw, there’s a good chance you’ll never want to go back to what you used before.

Just because Turkish towels are made of higher quality and more durable materials than other towels, it doesn’t necessarily mean you will be stuck with a hard to care for towel. In order to take full advantage of his absorbency as a bath towel, you will need to wash it before you use it for the first time. This activates its absorbency, in a way. You won’t need to use fabric softener or dryer sheets and you can either dry Turkish towels int he dryer on low heat or hang dry them.

Another popular use for Turkish towels is as a wall tapestry. Or, you can use one as cover for your yoga mat. Clearly, the possibilities are almost endless when it comes to Turkish towels. Because of how lightweight, but soft and absorbent they are, you can use a Turkish towel in a number of different ways. Once you get a feel for how soft they are and how much they differ from a throw blanket or towel you might already have, you’ll find it hard not to use a Turkish towel for almost anything.

Where To Buy Turkish Towels

You can find plenty of towels which are in the same style as Turkish towels at stores like Target, but finding authentic Turkish towels is more important to some people. And while you might not mind using a Turkish towel copycat over the real thing, these are some of the best Turkish towels you can buy right now. You can also buy authentic Turkish Hammam towels on Brooklinen. They come in a handful of different colors and feature the standard fringed ends. And like other Turkish towels, these ones can be used in a variety of different ways. 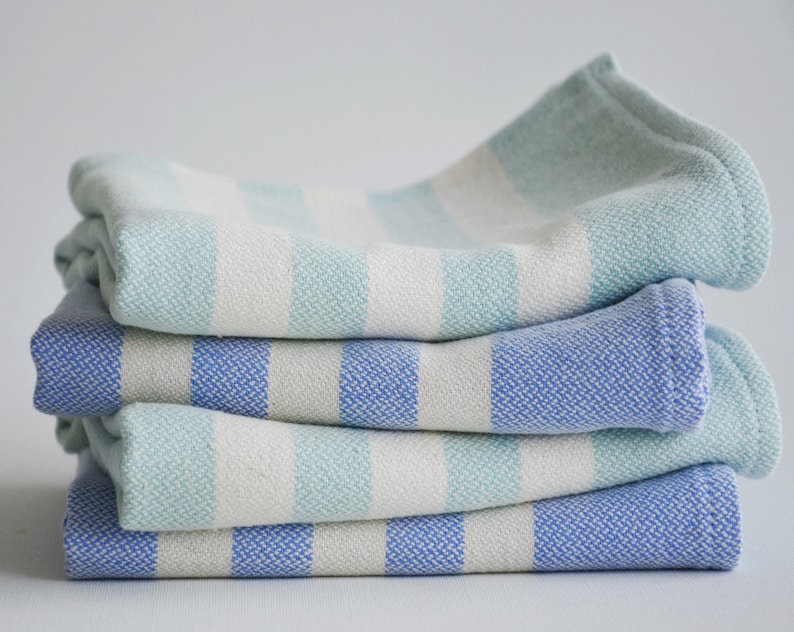 Or, you can opt to buy your Turkish towels on Etsy. You are likely to find genuine towels from Etsy shops located in Turkey, which adds even more authenticity to the towels. Plus, you can find different sizes to be able to use the towels as dish towels if needed.

There isn’t necessarily anything wrong with standard beach, bath, or hand towels. You can even use standard towels and Turkish towels interchangeably if you prefer to. But once you try out Turkish towels, you probably won’t want to go back to other towels you might have used before. The best thing about Turkish towels is that they are made of a soft and absorbent cotton that has so many different uses, it’s hard to believe you can use it in so many different ways. They aren’t as affordable as other towels, but the versatility you get with Turkish towels make them well worth the cost every step of the way. 7 Tire Swing Ideas And How To Make One Yourself 12 DIY Floating Shelf Ideas Because Bookcases Are So Last Year 16 Hobbies For Moms That Don't Just Include Netflix & Wine